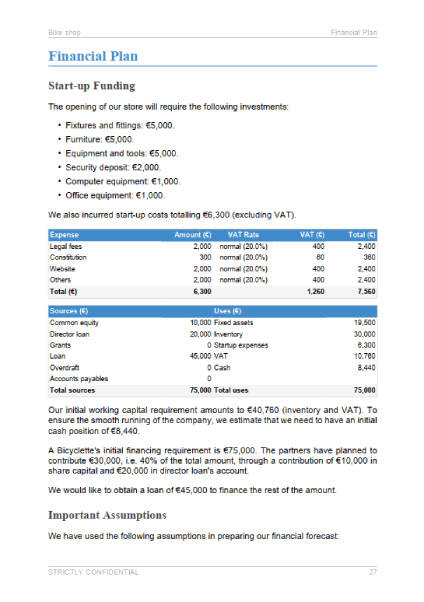 Not accustomed to writing business plans? Our bike shop business template will turn a typically challenging process into a total breeze.

Modelled on a complete business plan of a bike shop in Normandy, our template features both the financial forecast and the written part that presents the project, its team, the local market and the business strategy implemented by the management. 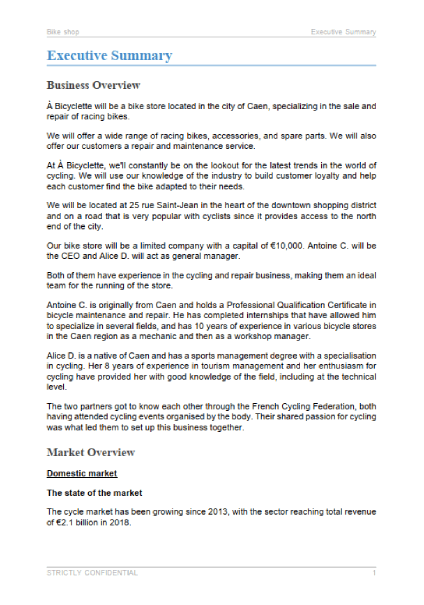 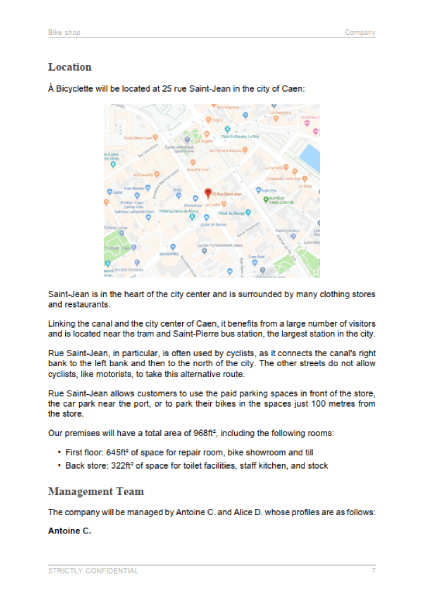 The template contains a complete presentation. If you choose to adapt this template to your project in the software, you will be able to include images and rich text. 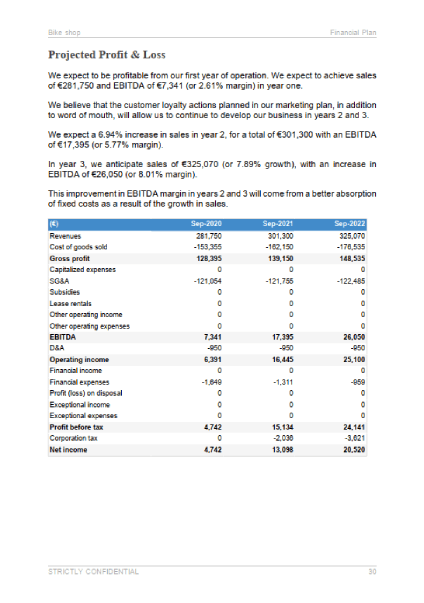 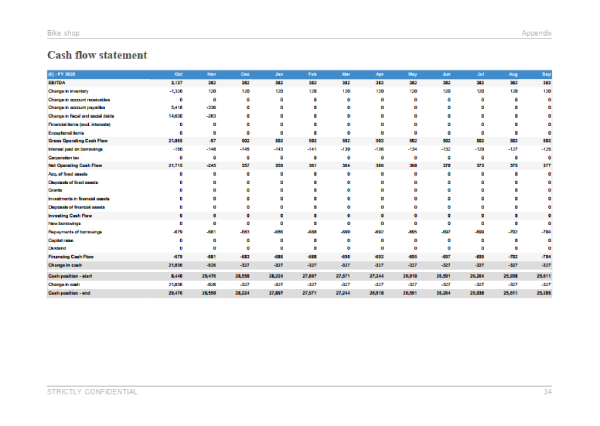 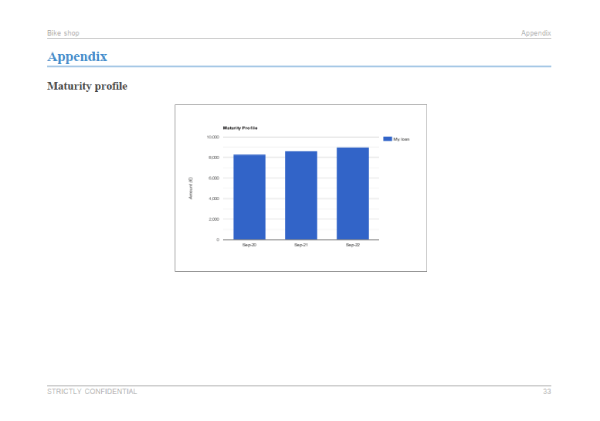 A Bicyclette will be a bike store located in the city of Caen, specializing in the sale and repair of racing bikes.

We will offer a wide range of racing bikes, accessories, and spare parts. We will also offer our customers a repair and maintenance service.

At A Bicyclette, we'll constantly be on the lookout for the latest trends in the world of cycling. We will use our knowledge of the industry to build customer loyalty and help each customer find the bike adapted to their needs.

We will be located at 25 rue Saint-Jean in the heart of the downtown shopping district and on a road that is very popular with cyclists since it provides access to the north end of the city.

Our bike store will be a limited company with a capital of €10,000. Antoine C. will be the CEO and Alice D. will act as general manager.

Both of them have experience in the cycling and repair business, making them an ideal team for the running of the store.

Antoine C. is originally from Caen and holds a Professional Qualification Certificate in bicycle maintenance and repair. He has completed internships that have allowed him to specialize in several fields, and has 10 years of experience in various bicycle stores in the Caen region as a mechanic and then as a workshop manager.

Alice D. is a native of Caen and has a sports management degree with a specialisation in cycling. Her 8 years of experience in tourism management and her enthusiasm for cycling have provided her with good knowledge of the field, including at the technical level.

The two partners got to know each other through the French Cycling Federation, both having attended cycling events organised by the body. Their shared passion for cycling was what led them to set up this business together.

The cycle market has been growing since 2013, with the sector reaching total revenue of €2.1 billion in 2018.

The parts and accessories segment is growing steadily. On the cycle side, the market is driven by price inflation: sales volumes are relatively stable, between 2.7 and 3 million, but the popularity of electric bikes is driving prices up.

Electric bikes have been very popular amongst consumers and now account for 40% of sales by value.

In terms of distribution channels, the market is dominated by specialized retailers, which hold more than half of the market share in value, followed by large sports brands.

When it comes to sales volume, large multi-sport retailers are dominating, since nearly two out of three bicycles are sold by these chains, compared with only one out of five in the independent retail sector.

Prices can also change significantly depending on which type of bike is being purchased. By opting for an electric bike, you have to pay around €1,564 in comparison to around €330 on average for a mountain bike.

According to carfree.fr, the average budget for a bike is €600 per customer, excluding the insurance costs of about €200 per year. As far as upkeep is concerned, around €240 is required per year for regular maintenance and possible repairs.

The demand for bikes within France

In addition to being a sporting activity, cycling is also popular among workers.

A 2015 INSEE study reports that 2% of working people commute to work using a bicycle, compared to 14.8% of French people using public transportation.

Bicycle use remains predominantly urban. Of the 2.7 million bicycles sold in France in 2018, 61% were city bicycles.

The travel rate has remained constant over the last ten years, with an average of 2% of the active population travelling by bicycle over a distance of about four kilometres.

The French government launched a major "cycling plan" in August 2018 to triple the share of cycling in public transport from 3% to 9% by 2024. The main objective was to fight pollution, by encouraging the French population to travel more frequently by bike.

According to a study carried out by shopalike.fr, cycling is the most popular leisure activity amongst the French, ahead of camping and skiing.

Two-thirds of mountain bikers, as stated by kaclycling.com, are men aged around 32. However, there are increasingly more women among these riders.

According to the Observatoire du Cycle, there are 2,775 specialized bicycle shops in France.

These shops are mainly made up of retail cycle dealers and repairers, but some retailers also have a hand in the resale of bike parts and accessories.

This market segment, estimated at €749 million, accounts for 34% of retailer revenues. Parts and accessories are generally related to bicycle maintenance or safety.

According to INSEE, 2% of Calvados inhabitants use mountain bikes and electric bicycles when cycling, which is equivalent to the national average. Calvados appears to be the most developed county in Normandy in terms of cycle networks.

Caen, which has 103,830 inhabitants, has a developed urban network and self-service bicycles which were set up by the city council in 2018. There are a total of 220 bicycles spread across 22 docking stations in the city.

Numerous bicycle facilities are located on the outskirts and in downtown Caen to allow free movement for cyclists. The bicycle network covers a total of 101 kilometers with 2,550 bicycle racks, as well as 125 dual bicycle lanes providing cyclists with a safer route.

In addition to city bikes, events and bike paths, the city also offers financial assistance to residents keen to buy a bike by covering 25% of the bicycle purchase.

Normandy benefits from a large number of cycling competitions, allowing sportspeople to participate and track their performance. In particular, Caen has a branch of the French Cycling Federation with 6,804 members in the Normandy region.

Taking into account our location and the customers located on Saint-Jean Street, we mainly target a local clientele looking for advice on how to maintain their bikes, but also how to get into the sporty aspect of it.

Our store will mainly focus on cyclists who practice cycling as a sports activity, especially since we sell racing bikes customised to their needs. Our niche market will allow us to build customer loyalty and bring customers to our store, particularly through word of mouth amongst sportspeople.

The presence of 5 bicycle stores in Caen city center indicates that the demand for bicycles is very high.

We have chosen to specialize in the niche segment of racing bikes, which is not yet served by any bike store within Caen. As a result, we expect moderate competition with the other bicycle shops that offer and target customers and products that are very different from ours.

We have identified several indirect competitors for our bike store:

Online sales generally offer a wide selection of bikes and accessories, however, this distribution channel does not allow the customer to try the product before buying it or to benefit from the personalized advice of a salesperson.

While the experienced cyclist may be also able to go online to shop and find a cheaper part or product, he or she will still be looking for a trusted bicycle mechanic to service the bike or advice on how to do it himself.

Supermarkets generally focus on the mid/low end of the range and do not sell racing bikes, as well as sports store chains that often have a very limited choice in racing bikes.

The level of competition with our store, therefore, varies depending on the type of indirect competitor. Nevertheless, we believe that our positioning in a niche segment gives us an advantage.

We believe that the customer loyalty actions planned in our marketing plan, in addition to word of mouth, will allow us to continue to develop our business in years 2 and 3.

The improvement in EBITDA margin in years 2 and 3 will come from a better absorption of fixed costs as a result of sales growth.

We expect our cash flow to be positive over the entire plan.

The cash flow generated by the company should cover loan repayments, while keeping sufficient headroom to maintain our equipment and deal with any contingencies.

The opening of our A Bicyclette store requires an initial investment of €75,000.

Guides to start or take over a bike shop

Have a look at our guides to start or take over a bike shop . 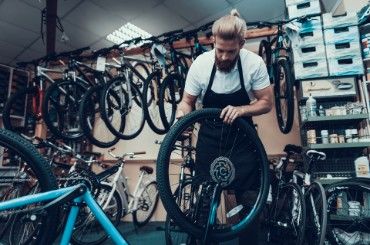 Business plan for a bike shop

Follow our advice to create a business plan for a bike shop.

How to take over a bike shop

Want to buy a bike shop? Check out our article to find out what to do.

How to carry out market research for a bike shop?

Find, in this guide, the main steps to carry out a market analysis for a bike shop.