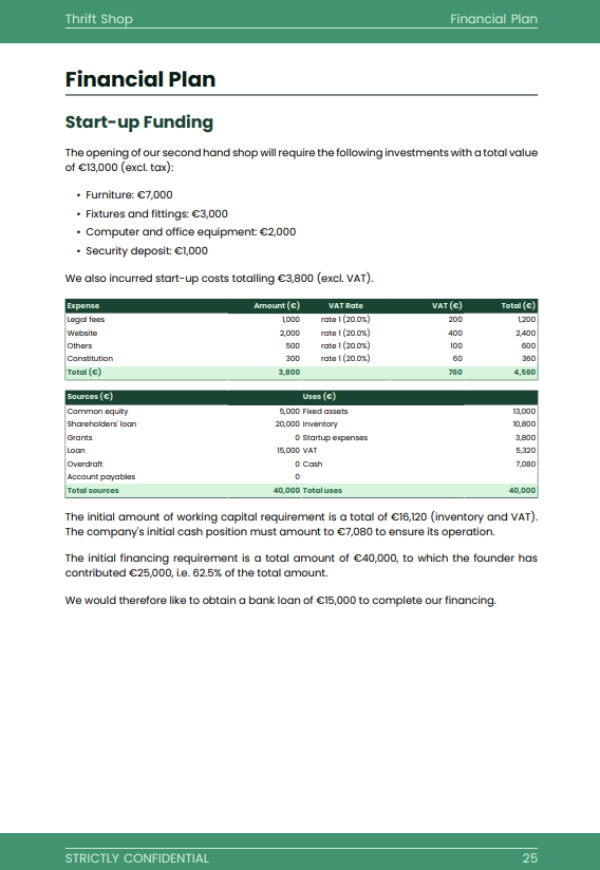 Not accustomed to writing business plans? Our thrift shop business template will turn a typically challenging process into a total breeze.

Modelled on a complete business plan of a thrift shop in Normandy, our template features both the financial forecast and the written part that presents the project, its team, the local market and the business strategy implemented by the management. 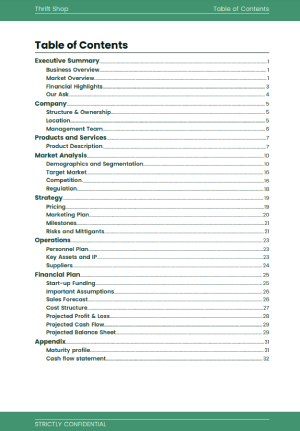 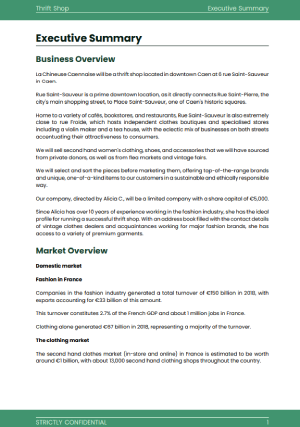 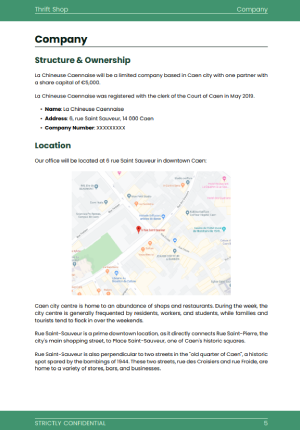 The template contains a written project presentation. If you choose to adapt this template to your project in the software, you will be able to include images and rich text. 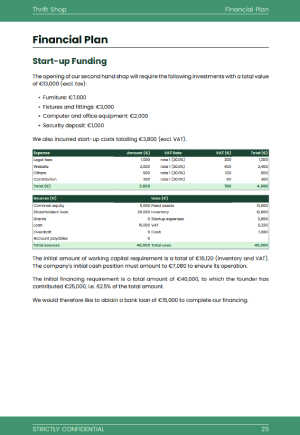 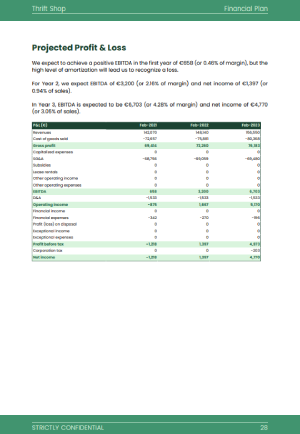 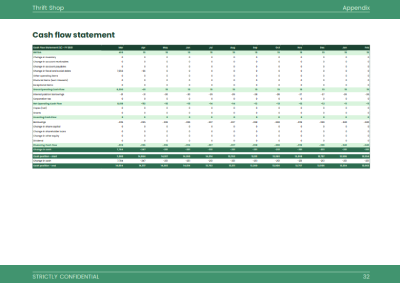 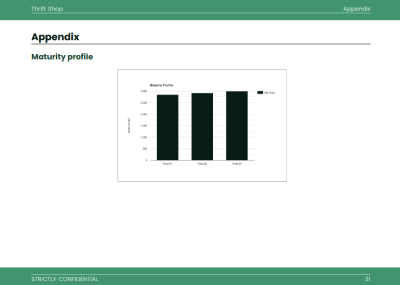 La Chineuse Caennaise will be a thrift shop located in downtown Caen at 6 rue Saint-Sauveur in Caen.

Rue Saint-Sauveur is a prime downtown location, as it directly connects Rue Saint-Pierre, the city's main shopping street, to Place Saint-Sauveur, one of Caen's historic squares.

Home to a variety of cafés, bookstores, and restaurants, Rue Saint-Sauveur is also extremely close to rue Froide, which hosts independent clothes boutiques and specialised stores including a violin maker and a tea house, with the eclectic mix of businesses on both streets accentuating their attractiveness to consumers.

We will sell second hand women's clothing, shoes, and accessories that we will have sourced from private donors, as well as from flea markets and vintage fairs.

We will select and sort the pieces before marketing them, offering top-of-the-range brands and unique, one-of-a-kind items to our customers in a sustainable and ethically responsible way.

Our company, directed by Alicia C., will be a limited company with a share capital of €5,000.

Since Alicia has over 10 years of experience working in the fashion industry, she has the ideal profile for running a successful thrift shop. With an address book filled with the contact details of vintage clothes dealers and acquaintances working for major fashion brands, she has access to a variety of premium garments.

Companies in the fashion industry generated a total turnover of €150 billion in 2018, with exports accounting for €33 billion of this amount.

This turnover constitutes 2.7% of the French GDP and about 1 million jobs in France.

Clothing alone generated €67 billion in 2018, representing a majority of the turnover.

A study by the American site ThredUp estimates that the second hand clothes market within the US will surpass the fast fashion market by 2028.

Between 2010 and 2018, according to the Institut Français de la Mode (IFM), 30% of French people were believed to have bought second hand clothes. By 2018, 64% of consumers said they would be inclined to buy second hand.

It appears that consumers don't feel quite as guilty making frivolous clothes purchases when they cost less than 70% of the price of a brand new top or pair of trousers.

Although millennials (born between 1980-1994) make up a large portion of second hand clothes consumers, it's Generation Z (born between 1995-2015) that forms the fastest growing customer segment.

More inclined to be attuned to the climate issues of our time, their attraction to the second hand clothes market means the sector is constantly evolving.

Although generation Z buys the most second hand clothes, a vast majority of these purchases are made online.

The environmental impact of fast fashion has been pivotal in turning the tide towards second hand goods, with 72% of consumers in 2018 claiming they wanted to buy from environmentally conscious brands.

According to the IFM, the standard clothes budget of a French woman decreased by 3.2% in 2018. This brings the average annual clothes budget (all genders and age groups combined) within France to €472.

Women aged between 15 and 59 years old, who are our core target, make up about 20% of the local population.

Caen is also a student and tourist city, enabling us to rely not only on Caen locals, but also on tourists passing through or students on the lookout for cheap vintage threads.

A majority of the vintage and thrift shops are grouped together in the Rue de Bras and Saint-Sauveur circuit, giving anyone on the lookout for second hand clothes a reason to prioritise this shopping street other than others.

The city is easily accessible via bus and tram, as well as the Caen ring road, which connects the city centre to other surrounding towns, including Mondeville and Hérouville Saint-Clair.

We will predominantly target women between the ages of 25 and 55, as they make up the majority of thrift shop customers, as well as one of the largest segments of the Caen population.

According to the Institut Français de la Mode, the average clothes budget per French woman is €472 each year.

The arrival of a high-end thrift shop within Caen will help meet the expectations of this target clientele.

While like Gen Z, millennials and baby boomers want to consume more responsibly, they still want to wear reputable brands, meaning they're willing to spend a bit more money on clothes that are unique and of good quality.

We have identified 4 competitors selling second hand clothes within Caen.

These competitors are, for the most part, located in the Saint-Sauveur district and sell vintage clothing.

Although we expect strong competition from other second hand clothes shops in the downtown area, we trust that the market is large enough to accommodate a new entrant.

We believe that, thanks to our high-end products and the fact we'll be located in a shopping area where no other second hand stores are currently present, we'll be able to successfully set ourselves apart from rival clothes shops nearby.

We expect to achieve a turnover of €142,070 in our first year of business.

This growth will be driven by word-of-mouth and the implementation of customer loyalty actions described in our marketing plan.

We expect to achieve a positive EBITDA in the first year of €658 (or 0.46% of margin), but the high level of depreciation and amortization will lead us to recognize a loss.

Our cash generation is expected to be positive over the plan as a whole, and the company is adequately capitalized to meet its financial commitments, while maintaining sufficient liquidity to meet any contingencies.

We would like to obtain a bank loan of €15,000 to complete our financing requirement. 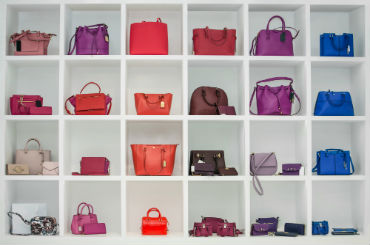 Get inspiration from our leather goods shop business plan template. 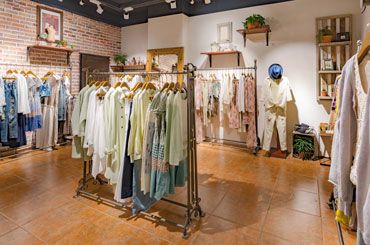 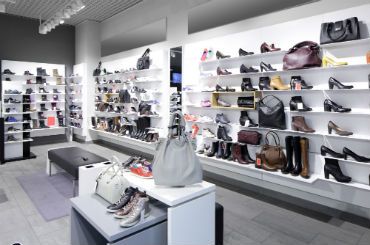 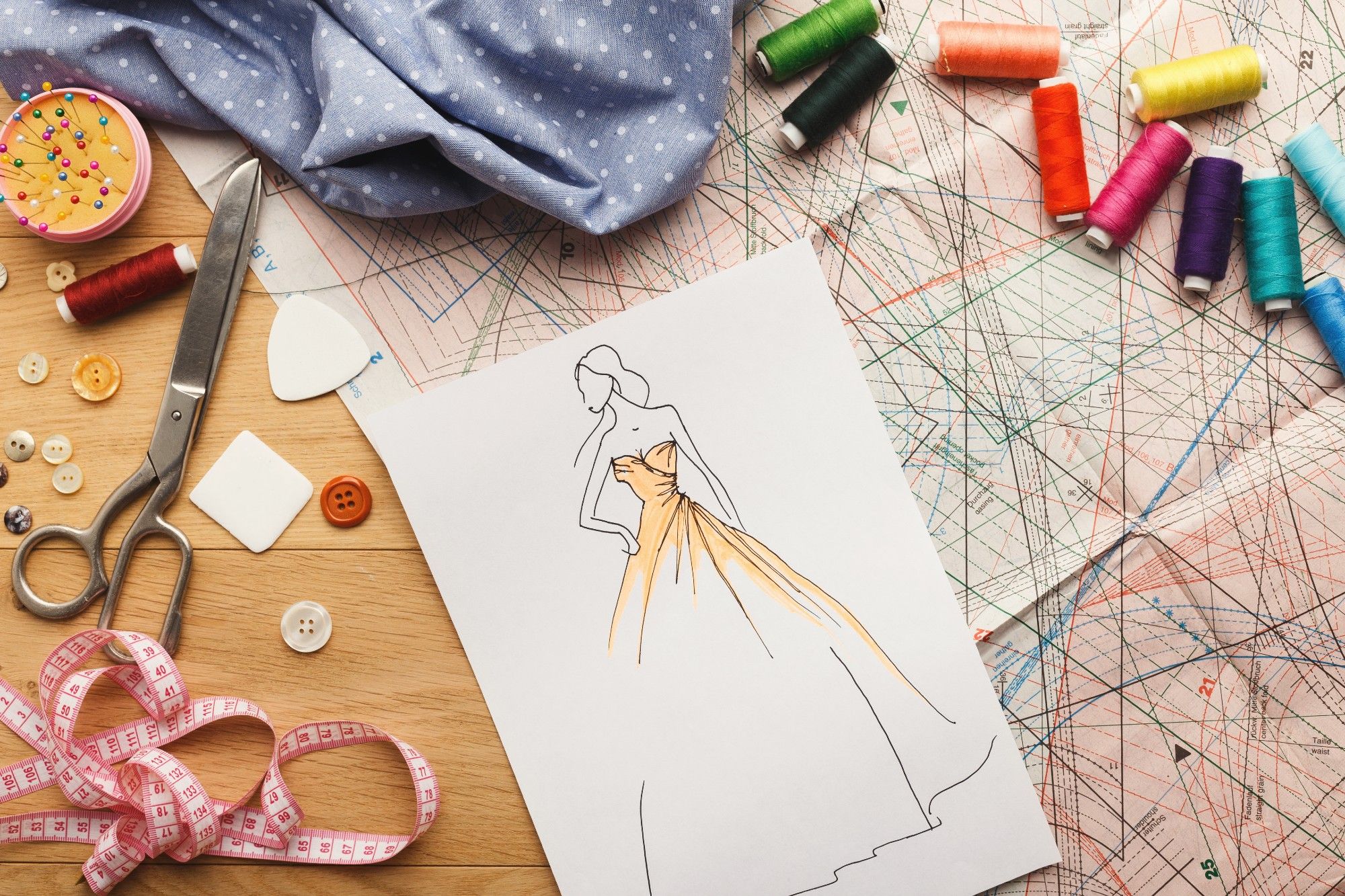 Open your own clothing line by having a look at our business plan template. 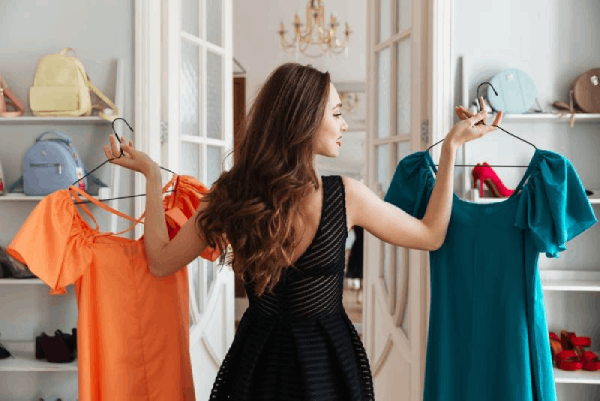 How to open a thrift shop

If you would like to open up your own thrift shop business, have a look at our guide.

How to start a clothes shop 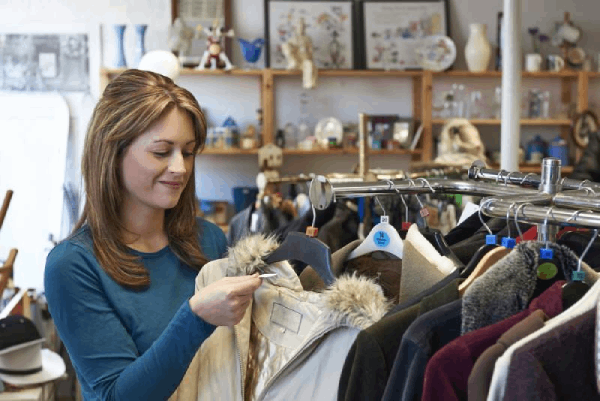 How to carry out market research for a thrift shop

Want to do market analysis for a thrift shop? Check out our article to find out how. 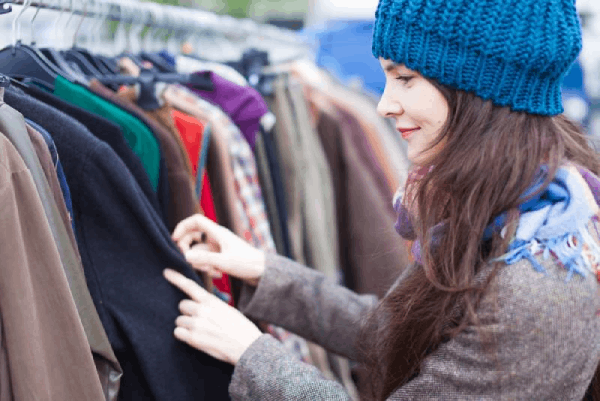 How to write the business plan for a thrift shop

Not 100% sure on how to proceed? Read our guide for your business plan thrift shop.