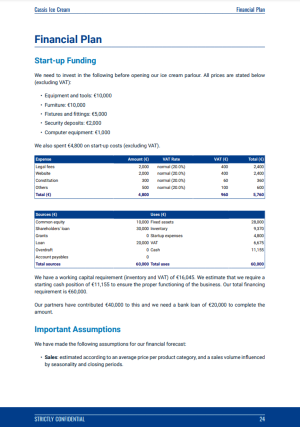 Not accustomed to writing business plans? Our ice cream parlour business template will turn a typically challenging process into a total breeze.

Modelled on a complete business plan of an ice cream parlour in Cassis, our template features both the financial forecast and the written part that presents the project, its team, the local market and the business strategy implemented by the management. 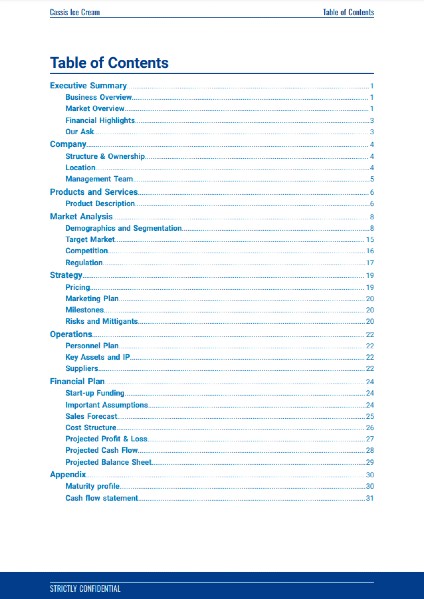 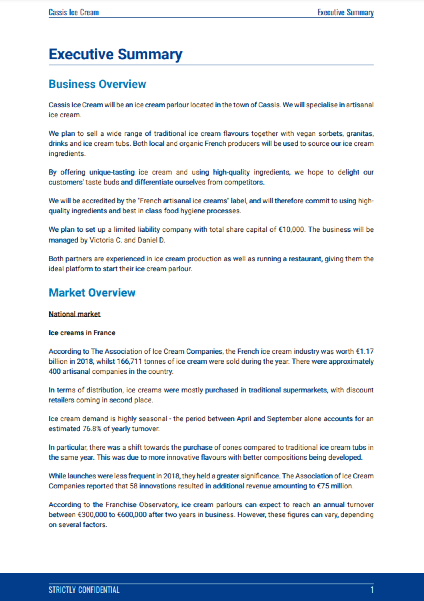 Executive summary
The template contains a written project presentation. If you choose to adapt this template to your project in the software, you will be able to include images and rich text 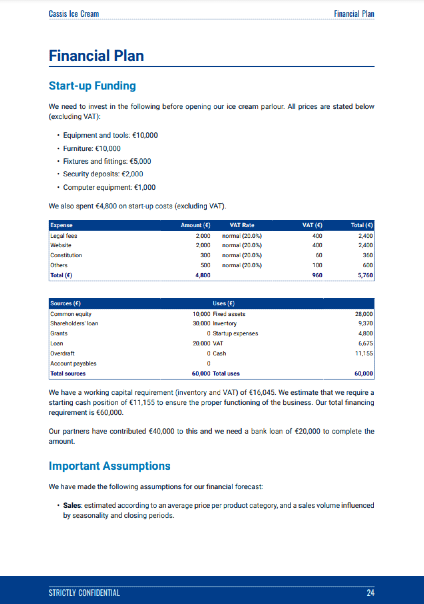 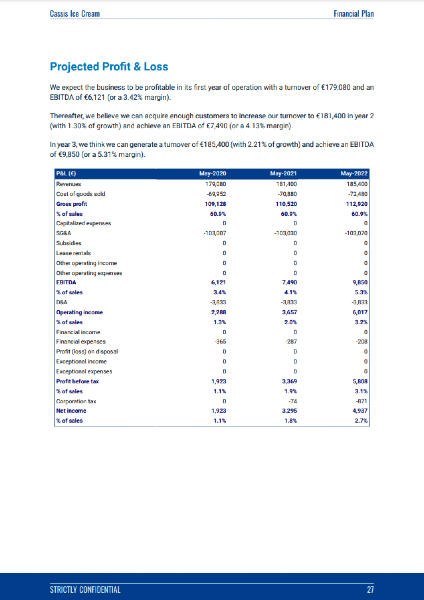 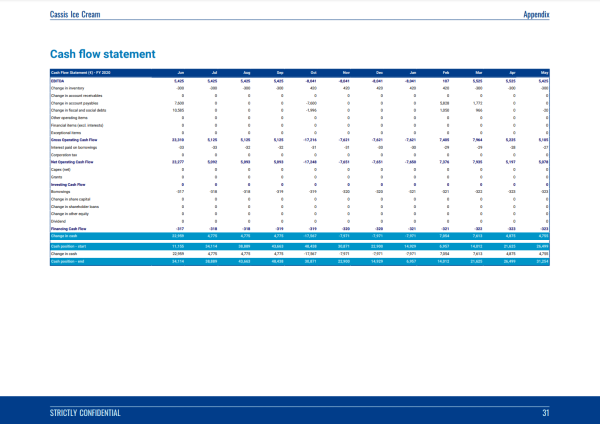 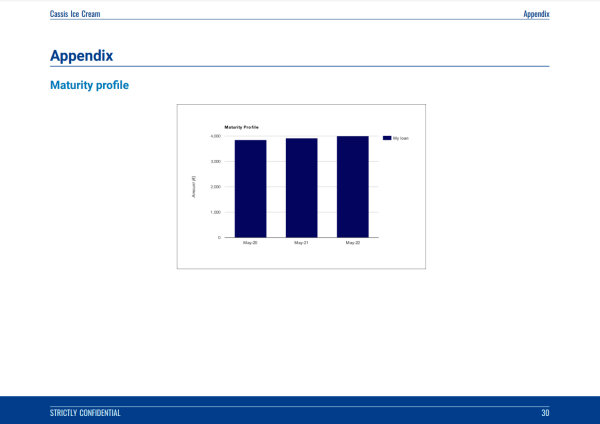 Cassis Ice Cream will be an ice cream parlour located in the town of Cassis. We will specialise in artisanal ice cream.

We plan to sell a wide range of traditional ice cream flavours together with vegan sorbets, granitas, drinks and ice cream tubs. Both local and organic French producers will be used to source our ice cream ingredients.

By offering unique-tasting ice cream and using high-quality ingredients, we hope to delight our customers' taste buds and differentiate ourselves from competitors.

We will be accredited by the "French artisanal ice creams" label, and will therefore commit to using high-quality ingredients and best in class food hygiene processes.

We plan to set up a limited liability company with total share capital of €10,000. The business will be managed by Victoria C. and Daniel D.

Both partners are experienced in ice cream production as well as running a restaurant, giving them the ideal platform to start their ice cream parlour.

According to The Association of Ice Cream Companies, the French ice cream industry was worth €1.17 billion in 2018, whilst 166,711 tonnes of ice cream were sold during the year. There were approximately 400 artisanal companies in the country.

In terms of distribution, ice creams were mostly purchased in traditional supermarkets, with discount retailers coming in second place.

Ice cream demand is highly seasonal - the period between April and September alone accounts for an estimated 76.8% of yearly turnover.

In particular, there was a shift towards the purchase of cones compared to traditional ice cream tubs in the same year. This was due to more innovative flavours with better compositions being developed.

While launches were less frequent in 2018, they held a greater significance. The Association of Ice Cream Companies reported that 58 innovations resulted in additional revenue amounting to €75 million.

According to the Franchise Observatory, ice cream parlours can expect to reach an annual turnover between €300,000 to €600,000 after two years in business. However, these figures can vary, depending on several factors.

A survey conducted by Harris Interactive in 2017 found that French people eat ice cream at least once a week during summertime (sample of 1,000 participants).

According to a report by Nielsen, all French households, regardless of age and size, consumed more ice cream in 2018 than they did in 2017.

However, consumption was much higher among the under 35s and 35-49s. There were 8.2 purchases, on average, in each age group, during the year.

In France, households spend an estimated €46.60 per year on ice cream.

According to the INSEE (National Institute of Statistical and Economic Studies), Bouches-du-Rhône was home to 2.02 million inhabitants in 2017.

Located near Marseille, the commune of Cassis had 7,149 inhabitants in 2017.

Whilst the population follows a relatively even age distribution, the majority of residents are over 30.

Despite Cassis being a small town, its main asset is its proximity to Marseille.

There is an efficient and fast train service between Cassis and Marseille - two different rail routes are available for travellers. Neither takes above 20 minutes.

The town's harbour along with historic castles and pathways attracts a vast number of tourists every year, including inhabitants living off the coast of Marseille.

According to La Provence, the touristic season for 2019 was positive, as there were 54,174 requests made to the Tourist Office, 58% from French tourists and 42% from foreigners.

In addition to the Tourist Office, there were also 6,254 requests to the reception office at the Gorguettes car park and almost 50,000 people used the shuttle bus between the station and the town centre.

Cassis was ranked first in terms of attractiveness, on par with Porto Vecchio, and was notably recognised for the quality of its water.

We expect to achieve a turnover of €179,080 during our first year of trading

This growth will be driven by word of mouth and the implementation of marketing actions aimed at building customer loyalty.

We expect to generate positive cash flows throughout and the company should be adequately capitalised to meet its financial commitments while retaining sufficient liquidity to deal with any unforeseen circumstances.

The initial financing requirements of the project are estimated to be €60,000. Our founders have planned to contribute €40,000, that is to say, 67% of the amount.

We would like to obtain a loan of €20,000 to complete the financing. 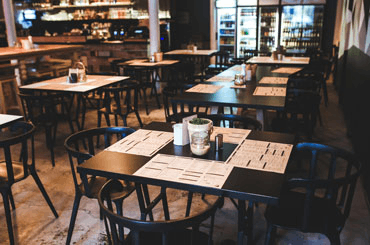 Help yourself with our restaurant business plan template. 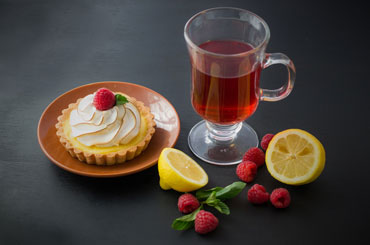 Open a tea room with our business plan template. 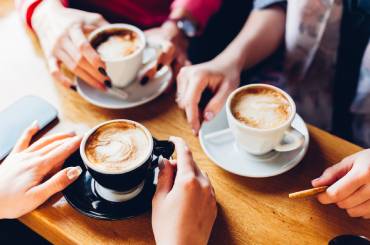 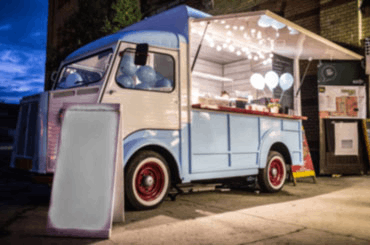 If you want to open a food truck, check out this business plan template.